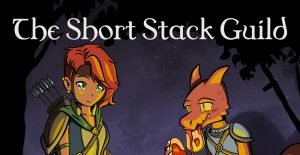 Eager to start an adventuring guild of their own and make a name for themselves, Myrtle Shortwick and Ickim the Great take on odd jobs and adventures!

A ranger from the High Forest, Myrtle is a very strong and capable warrior. She joins up with Ickim after rescuing him from an angry mob who thought he was going to steal something. She watches over her younger companion and helps guide their group through the wilderness with her expertise in tracking and nature.

Ickim is a fighter through and through. He’s not overly intelligent and relishes in combat. He is able to conjure a dark shadow of himself (called Mikci) that can take hits for him and help him in a fight. He uses it to protect his friend Myrtle, summoning Mikci to block attacks and putting himself in the front of a fight. He has a great love for cheese.